The deep-red and attractive gemstone, generally, found in antique jewellery is nothing but incredibly magnificent Garnet. However, Garnets are not just deep-red in color, they are found in almost every color that a rainbow has.

Garnet Jewelry is considered a perfect gift for the second anniversary.

Garnets are the stones that belong to the silicate family and are used as precious stone since the Bronze Age. In USA, Garnet is considered the birthstone of people born in January.

By the term “Garnet”, the first thing that the experts mean is a group of more than ten gemstones, which are almost the same in chemical composition.

Where is Garnet found?

In the present times, Africa is the world's largest supplier of garnets to the world. The other sources from where Garnets are mined are USA, India, Brazil, and Soviet Union.

The beneficial properties that garnet contains:

Garnets are believed to cure diseases, like spinal and cellular disorders, thyroid, haemorrhages, and inflammatory diseases. It also helps to purify the blood, promoting the production of haemoglobin, and keeping the reproductive system healthy.

The medicinal abilities of garnet are thought to reduce the toxins in the body, stimulate metabolism, treat cellular and spinal disorders, regenerate DNA, and assimilate vitamins and minerals. It is also thought to fix the disturbance related to the heart except for arterial hypertension. Reportedly, garnet has also believed to relieve arthritic pain and rheumatism.

Garnet is a useful stone at the time of crisis, particularly when there are no ways a person can escape from that situation. The survival instinct that is required to face such situations is bestowed upon the wearer by the garnet gemstone. It brings courage and faith in such negative situations and turns crisis into the challenge.

Garnet can perform as a strong aide, which balances the energy system and upholds the attitude. Garnet is believed to prevent insecurity and fear of emotional unrest, as well as money loss. This is a lucky stone for love, success and fulfilling desires. Garnet can be worn to increase the popularity and positivity amongst others.

Garnet is known for Attracting Money, Prosperity and Luck. It endows with a protective power and stable soothing energy throughout its use.  It is thought to nurse back emotional problems and disparity. Garnet is used to alleviating bad dreams while sleeping.

Garnet stabilizes the connection of human beings with spirituality. It enhances love between the partners and converts it into a deep spiritual commitment to each other. It sharpens the perceptions of the wearer and lets him go off the old and obsolete ideas. Garnet aids in getting rid of the prevalent orthodox thoughts and taboos, which opens up the heart and endows the wearer with self-confidence.

The stone of commitment, garnet reflects the attributes of understanding and devotion. It monitors the flow of energy flowing in the body.

The base chakra is the abode to the kundalini or the life energy of the body. A balanced root or base chakra keeps the person away from lethargy, fatigue, and inactivity.  The crown chakra is situated at the top of the head, which allows all the positive things to enter the body and drives out all the negative things. A balanced crown chakra gives way to the new methods, ideas, visions and approaches to come into the mind of the person.

Some facts about Garnet

Garnet encompasses a color changing property due to which it is sometimes mistaken with Alexandrite. Garnet is conserved to be the stone healing base and heart chakra. It is associated with the planet Mars and is considered good for people born under the zodiac signs- Virgo, Leo, Aquarius and Aries.

Garnets are commonly divided into sub-groups, Group 1 is said to contain aluminium as their second element, which includes Almandine, Pyrope, and Spessartine, and the other group i.e. Group 2 is said to contain calcium as their first element, which includes Grossular, Uvarovite, and Andradite. The hardness of this gemstone is in between the range of 6.5 to 8.0 on Moh’s scale.

Garnet at a Glance

Garnets are available in different colors, and are from the family of related groups of minerals as well, which includes andradite (colorless, yellow-green, or brown to black), almandine (red to violet red), pyrope (deep red), grossular (white, brownish-red, yellow-green,yellow,  orange or black), and Spessartine (rose, yellow, or orange to reddish-brown).

Why Garnet In Limestone is so precious?

Garnet in Limestone is a precious and rare gemstone, one which is slowly becoming popular in recent years because of...

Garnet - Perfect Gemstone For Your Horoscope 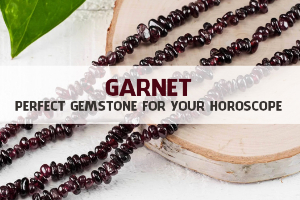 Garnet, the stone spells magic when owned by the people born in January. It is a beautiful stone with a variety of color... 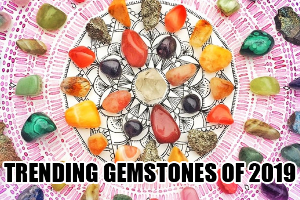 There are quite a few gemstones that are likely to trend in 2019 and in this article we take a look at a few trends.


Nike
You have mentioned various tinctures of Garnet. I also have been recommended to wear this charm but I am little confused which one should I put on. Can you please suggest?
Reply on 1/11/14

Jewelexi
Hi Nike… actually Garnet possesses all the healing properties as mentioned in the article above regardless of its tincture. If you are being recommended then you should go for it. You may choose any shade of it, it doesn’t matter.
Reply on 12/11/14

Emil
Garnet is a semi-precious talisman which prevents the fear and insecurity of the wearer’s emotional unrest. It also avoids the money loss. It is quite popular as a lucky charm for fulfilling desires, for success and love. I am quite impressed with its features. I think I should try it. Should I? Please suggest.
Reply on 27/11/14
Jewelexi
If you find this talisman suitable for your requirements then discuss with your astrologer and then if he suggest then you should go for it as in this case astrologer plays an important role.
Reply on 13/1/15

Jacob John
my astrologer has recommended me this gemstone...as it is my birthstone..but here i have got confused as there are various shades of it...which one should i try? please suggest..
Reply on 10/4/15
Alexa
hey Jacob.....according to me you may try any of the shades of Garnet...if it is your Zodiac charm then any hue of it will prove to be beneficial for you...i have also tuned its red shade...and you know what it has become best thing ever for me...i just love it...you should also go for it...take advantages of it...
Reply on 4/5/15

Wesley
Garnet and its metaphysical and healing properties lore. Did you know Garnet is called a stone of regeneration and stability?
Reply on 13/9/15

Olivia
Garnet is a perfect gift for the 2nd anniversary but I want to gift it on my friend's 1st anniversary. Is it lucky for them also or I have to search for something else? Please suggest.
Reply on 23/6/19

rochell
The quality of your garnet stone is literally so fine that I fell in love with the garnet.
Reply on 2/10/19

bruince
Your garnet collection looks beautiful among all. I love to buy from you.
Reply on 26/11/19