Relatively a new, but an incredibly beautiful stone in the world of stones and gems, Tanzanite has no illustrious an ancient history as the other stones have, but it is still an extremely demanded and popular precious stone due to the spectacular looks that it owns.

Tanzanite was discovered at first in 1967, below the areas of Mount Kilimanjaro, and hence has been named for its country of origin, Tanzania, Africa. It is one of the most prized crystals of all due to its metaphysical properties of spiritual discovery, and getting together all features of communication and intuitive power. It is hence also called as the “Stone of Magic”. Tanzanite is one of the most fascinating and enviable precious of today’s modern world.

Where is Tanzanite found?

Tanzanite is relatively a costly and rarely occurring stone and is found only in Tanzania, East Africa from where it has got its name too.

Tanzanite has proved to be beneficial in following ways:

Tanzanite is believed to build up the immune system, improve liveliness, and detoxify the blood. It promotes the restoration of cells, skin and hair, and shelter against the offshoots of surgical or medical involvement. It is also believed to bring out one from the state of comatose or exhaustion.

Tanzanite is also thought to be caring towards the psychological turmoil, trauma, and nervous tension and is exceptionally good for those who suffer excessive sweating. It may alleviate the severe pains of migraine and in conjunction to all this it is also believed to cure the problem of chronic alcoholism.

Tanzanite Silver Jewelry produces the energy in the body of the wearer, which brings pleasure and relief from the unnecessary tensions. It opens the insight of the wearer and inspires him to feel more compassionate and loving.

Tanzanite helps in triumphing over experiences of disasters and fear and re-builds the trust of the wearer. It helps in solving the queries related to the meaning of life. Tanzanite allows one to be grounded and express the true feelings.

The high vibrational energies of Tanzanite and its power of shifting colors elevate the consciousness of the wearer. It links to spirit guides, Ascended Masters, angelic realms, and Christ realization. It helps in deep profound meditation and also assists the wearer to accept the changes of life. It is also a stone that supports karmic healing.

Tanzanite stimulates the Third Eye, Throat, and Crown Chakras, connecting the higher mind with impulse and communication. Tanzanite encompasses a blue crystal energy that inspires the Throat chakra, which is considered as the voice of the body. By unblocking the throat chakra, Tanzanite lets the wearer express openly, and without hesitation his beliefs, thoughts and ideas. Tanzanite is also considered great for unblocking the brow or the third eye chakra thereby directing the wearer and keeping his inner strength healthy and vibrant.

Tanzanite also heals and balances the crown chakra, which is the fountainhead of the spirituality and the beliefs a person encompasses. When the crown chakra is in balance the wearer feels tranquil and calm in any situation whether good or bad and does not loose the temper fast.

Some facts about Tanzanite

Tanzanite is from the family of blue Zoisite, which is a calcium aluminium silicate. It appears in prismatic, generally striated crystals, which are clearly transparent to a little opaque.

On Moh’s scale, the hardness of the stone measures 6.5.

Tanzanite at a Glance

The colors in which Tanzanite is highly coveted ranges from the intense marine blue to a light purplish-blue. When raw, Tanzanite is found in colors, like purple, brown, yellow, and blue, and all these are treated under heat and high temperature to get that striking and most sought after violet-blue color.

How Tanzanite Ends All Your Tension Before Christmas? 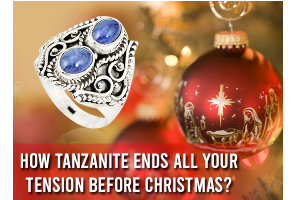 Tanzanite gemstone or Tanzanite silver jewelry can be a perfect Christmas gift. Full of power to bring down stress levels,...

Gemstone Jewelry Trends That Are Coming 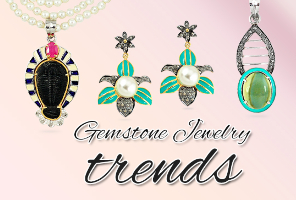 Gemstone jewelry adds charm and chic to anyone’s wardrobe but to wear something that is trending is always good. In... 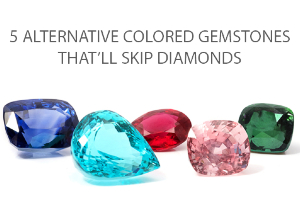 If the diamond doesn’t suit your budget or if you are looking for some alternative gemstones, then Tourmaline,...


Aanya
Hello, I have read all the details related to tanzanite charm. I also have this beautiful talisman that is quite helpful for me in many ways. However I take care of it but I want the some apt caring tips of Tanzanite so that it gleam and shine may remain with it throughout my life. Please help me out.
Reply on 1/11/14

Jewelexi
There are many tips for taking care of Tanzanite gemstone like:

•You should keep it away from other jewels as it may get scratches on its surface.
•Keep it away from the acidic or chemicals. For this you may put off it when you perform any task with these agents as it may cause chemical reaction that may harm the shine of the charm.
Reply on 10/11/14

Yim
Tanzanite detoxifies blood, improve the liveliness and build up the immune system. These features of this charm matches with my requirements. Should I choose it for me? Please suggest.
Reply on 21/11/14
Jewelexi
yes Yim...you may tune this gemstone as it will prove be beneficial for your...you may also ask your astrologer if have confusion...
Reply on 31/3/15

Daniel
this gemstone is suitable for Aries and Pisces beings...i am Leo..but want to take the advantage of its healing powers..should i tune it..please suggest..
Reply on 9/4/15
Jewelexi
Hi Deniel, you may post your date of birth here, our experts will go through it and will suggest a perfect and suitable gemstone for you.
Reply on 5/5/15
Denial
Hi Jewelexi, thanks for reverting back with a solution to my problem.

Actually I want to know that which gemstone will suit me. I am Leo and gemstones are worn according to some specific aspects like birth date or zodiac.

So, any particular gemstone for me? Let me know. Thanks once again for your fast response service.
Reply on 29/5/15

nicolejudy16@gmail.com
I'm a huge admirer of your tanzanite jewelry collection. I run a shop and your wholesale prices benefit me to a large extent...
Reply on 26/10/18

Clinton
Tanzanite is a lovely crystal which always gives an alluring look at the time of wearing.
Reply on 8/7/19

Ricco
Tanzanite stone and your jewelry look exceptional!!
Reply on 5/9/19

merlina
Your jewelry is so eye-catching and unique. I always wish to buy something whenever you update your stock.
Reply on 11/12/19