Turtle Agate is a dark stone with mysterious waves of tan and brown flowing throughout, as well known as Stromatolite they are rare formations found mostly in the fossil record of the Precambrian. These stones are not only a healing tool for past life regression, but also make cool specimens in a fossil assemblage. Each polished stone has perfect composition and vividness. Known to be a stone for protection, it is “The Stone” for everyone. With a variegated chalcedony, this is one of the oldest stones in recorded history. Turtle Agate attracts vigour and is a protector from bad dreams. It shields the wearer from stress and energy drains. Since, Biblical Babylonian times this banded stone is used to give rich and varied dreams and ward off storms. As it is thought to be beneficial for gums, it treats the upset stomach too.

It is true that no stone can change emotions, feelings but helps to change the level of acceptance. “This time shall pass to” best suits as one of the characters of this gem, it will make people trust in this idiomatic expression and help to go on to another and better day. Turtle Agate gives the wearer the strength to carry on and rally round to take an important decision of life as well as win them.

Almost found everywhere this stone is sometimes found with bands of brown, helps the wearer to let go of anger and bitterness by balance emotional energy. Wearing Turtle Agate is supposed to bring prosperity, wealth and health to the wearing individual. It is also believed that this charismatic stone attracts friends towards the wearer. This abundance stone enhances attention, diligence, endurance and achievement in one's life and endeavours. It turns out to be advantageous for the people who face sensitivities to weather and contamination and gives relief. Also known as Stromatolite, it has been known to ward off the evil eye. Turtle Agate bestows strength to sensitive people by conferring more self-satisfaction and protects him from hurt. The rarest and most popular agate, Turtle Agate is an uplifting and calming stone which encourages peace, happiness and gives physical stamina. This mesmerizing Turtle Agate impedes the burning desires for things the wearer does not need and supports those juggling commitments or multiple tasks. It helps writers express ideas into profitable form and helps juvenile brood learn to walk and not fall as they get older.

Where is Turtle Agate found?

Turtle Agate is generally found in hypersaline lakes and marine lagoons where extreme weather due to high salinity levels exclude animal grazing. Shark Bay in Western Australia, Lagoa Salgada known as Salty Lake, north of the state of Rio de Janeiro, Brazil are such locations where excellent specimens are observed today. Inland turtle Agate is found in saline waters of Cuatro Ciénegas, in the Mexican desert, a maar lake in Mexico's Oriental Basin and in Lake Alchichica.

They are also found in British Columbia, in the state of Quintana Roo, in southern Turkey, Canada, Peru, Russia and Australia.

It candles to calm the atmosphere, reduce family quarrels and stressful situations. Turtle Agate enhances sexual energy by giving physical resilience. It deepens the connection of an individual with the earth. It is believed to correct blood vessels, skeletal disorders and gives relief from nerves pain.

It enhances the pleasant personality of the wearer by providing inner peace and an admiration for the simple delight of being alive and active. It’s warm, protective properties promote maturity security and self-confidence. It is also believed that if this wonderful stone if wearied between the breasts, it influences lactation secretion.

Turtle Agate, considered by tribal priests of the past, to be a miraculous healing stone gives a power to interact with the human organic system. It enhances mental function by improving analytical abilities and concentration. When used as an elixir, it stimulates the digestive system and relieves gastritis. Placed on the abdomen it treats the hollow organs of the human body such as stomach, uterus, intestines. By enhancing the perception of an individual, it too heals skin and eye disorders, as well as itching caused due to insect bites. Historically, it is believed if wear in the middle of the chest it strengthens the cardiac muscle and soothes blood vessels along with heart.

Put the turtle agate in the refrigerator and place it chilled on the forehead it effectively cures the fever as believed. It may as well shorten the warning signals of the epilepsy, and defends the wearer from the problem of sleepwalking.

Related to reality and hard-headed thinking turtle Agates regular designs soothe the wearing individual’s desire for peace and harmony while the irregular designs of this stone thought to stimulate action and imperative decision-making.

Its elegant design creates a circular stream of vitality, energizing for the intellect and attitude. Turtle Agate uncovers the hidden circumstances and proves to be of assistance in self-analysis, self-acceptance. This healing stone helps to overpower from the acrimony of the spirit by fostering love, it heals negativity, anger and leads the courage to utter the truth as well start over with a fresh chapter of life. Turtle Agate works as a seeker transformer stone or crystal as it contains the energy power structure of the human mind and helps to find the new horizons along with new capabilities. Known to be fresh start crystals, these talismans prove to be pointers and directors to explore the adventure of a life. By unlocking the new prospects of growth and outlook for relationships, it is said to change situations furthermore transforms health in a positive manner. Traditionally, it is supposed to cure the  emotional disharmony that thwarts the acceptance of love.

Links into the collective awareness of the unity of life, Turtle Agate raises consciousness and encourages quiet reflection of one's life experiences that contribute to the spiritual development and inner stability. It is conducive to meditation, focus and intricate movements within the stone which rises up the calm and in relaxing state open up the wearer's mind to higher thought and profound truths. By encouraging spiritual maturity and growth, fervent inner vision.

Fostering love, it dissolves inner tension and create an appreciation of nature by Strengthening rational thought. Turtle agate is presumed to awakens inner talents by giving protection and providing perceptiveness to the situations. Turtle Agate dispense and stabilize Yin/Yang energy and relate the intellectual, emotional and physical bodies with the Etheric energies. It poses the aura and eliminate negativity, it also acts effectively to smooth dysfunctional energies.

Turtle Agate believed to create new hopes, enhances grace and light-heartedness and attune positive thinking, optimism expands the perspective from the hearts. The cleansing effect  of this stone is powerful at all levels of chakras. It helps with ambivalence and lethargy due to depression by increasing friendliness, forthrightness, and happiness. It is likewise employed to get inspiration from and connected with the entities residing in the spiritual worlds. By aligning all the chakras, it has been reported to strengthen the sight, to diminish cover and to promote marital fidelity. Connected to earth element this stone is connected to the base chakra and is responsible for the wearer's sense of refuge and surety on this earthly journey of spirit. Known as the foremost of the chakras of matter, enhancing root chakra turtle agate creates the firm basis for spreading (opening) out the chakras above. In the phases  of evolution of a being, the first stage—trust versus mistrust—is closely interrelated with the individual root chakra development. This stone is said to be a caregiver and readily give a person what he needed most to survive with consistency and to felt secure in the world.

Some facts about Turtle Agate

• Agate is lucid microcrystalline quartz moreover technically it is with stripes.
• Agate is known to be found in different varieties and color combinations, they are probably to be found all over the cosmos.
• Each agate is predisposed to have different healing properties due to its variegated colors and pattern.
• Agate is popular and widespread in a figure of U.S states so is seen as a country treasure.
• Agate is known to be a birthstone for September, for its zodiac sign is Gemini. It is also considered to be a gemstone for the 12th and 14th wedding anniversaries.
• Agate is a variety of chalcedony formed from layers of quartz which usually show varicolored bands. It normally occurs as rounded nodules or veins.

As well known as Algae Iron or Fossil Algae, Turtle Agate promotes balance, effectiveness and determination and can invite giant energy into places. With steadfast persistence, it works on the mind to help the wearer to release the fear that may be holding him back. It helps to purify and cleanse the area where it is located and said to be a best stone to have on the environment. Connection to the essence of life and stability, it will help an individual to release energy around issues from the past. Related to resilience and versatility, Turtle agate  is a stone of transformation assisting healing at an emotional level. Turtle Agate gently removes blockages within the meridians and chakra. It is a good meditation and help in assisting with past life recall, it teaches the purpose of life on Earth and our part in it.

Turtle Agate at a Glance

A silicified organic carbonate material, Turtle Agate is more often than not set up in all color hues and with a band of varied golden brown. Turtle Agate is one of the oldest fossil known and is about 3.5 billion old, and are actually structures formed by vast colonies of cyanobacteria also known as blue-green algae. Scientists believed this bacteria to be the earliest life form on Earth, which dominates Turtle agate process as of the construction blocks of life, including oxygen, carbon, and nitrogen.

Find How Turtle Agate Helps You In Different Ways 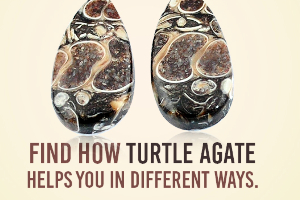 Turtle agate is one of the rarest and oldest types of agate. The stone is known as a stone of protection and is helpful to...


Joy
Turtle Agate!!! This gemstone name is new to me. I even don't know this type of gemstone exists in this world. Thanks Jewelexi for sharing such a nice hard work with us.
I want to give you an appreciation note for your job and want you to continue with this. This helps in updating our knowledge.
Reply on 29/5/15

joey joanas
From a long time, I am thinking to buy this stone but after reading your blog I will surely buy this stone soon. Thank you gemexi.
Reply on 21/5/19