Shiva Shell sometimes called Pacific Cat’s Eye, has been believed to open the Third Eye Chakra which transforms and mute negative energy. It is a stunning natural gem made of calcium carbonate and has a brown and black band that is carved into the shape of the eye. Lord Shiva other than India is worshiped in countries, Tibet, and Sri Lanka, the gem’s name is derived from Lord Shiva's third eye in the middle of the idol’s forehead. Shiva's eye is significant divination and transforming crystal which helps to find a new path in life.

It gives us the vision of the Third Eye and has Water energy it is believed to sharpen the wearer’s intuition, which in turn enhances the discernment and deepen the understanding. It is a stone of wisdom which helps to understand our world and events. Shiva's eye proves to be good if it is held in the north area of an individual’s home and is supposed to be associated with life history and career path. The flowing energy of this stone balances the push of life currents and will protect or guard against its ill effects. The Eye of Shiva or so-called Pacific Cat’s Eye is used principally as a meditation crystal to understand yourself and the issues that are happening in life. It is practiced to facilitate a deep understanding of your inner self so you can effectively dispense with the outside universe in a manner that is sizable for your heart. It is reported that it will reflect and fight back against the Evil Eye, and also helps with premonition efforts.

Shiva Shell contains the quality of a major Hindu deity Shiva means auspicious is the destroyer or transformer. As a special piece of jewelry, the Shiva Eye has an inimitable charisma and as a protective, lucky stone it symbolizes the "Third Eye of Shiva" and watches over the one who has it. The Third Eye represents the eye of knowledge and wisdom, the essence of the omniscience of the god of fertility, Shiva, who unites male and female. The coil on the rear of the Shiva Eye symbolizes development and apparent movement and is a substantial and important symbol for security against bad energies. It rolls up and strengthens optimistic energies. The Shiva Eye has a collectively positive effect on an individual’s natural well being. This organic gemstone commonly known as cat’s eye washed up along a riverbank and is carved into the anatomy of an eye to represent the eye of Shiva.

Where is Shiva Shell found?

The operculum of a sea snail, Shiva shell is found in the South Seas north of Australia. Being a part of many shelled animals, it is a calcified disc-shaped, an eye-like and is used in jewelry. The Shiva eye jewelry was most popular in Victorian Era Britain and are commonly found in African-American mojo bags in America. Middle-Eastern in origin is spread all across the globe from there to India and to Europe.

Shiva shell or Shiva Eye a protective covering at the orifice of the Turban snail shell symbolizes the creation, preservation and destruction of all from the flow of life, the constant change in the world, spiritual knowledge to creative visualization. Known as mermaids' money it is thought to be a good luck charm for fishermen. The eye of Shiva is supposed to assist in the accrual of wealth.

Shiva's Eye stones have been highly venerated in many cultures for thousands of years. This valued crystal has long been believed to provide protection against evil and enhance creativity, as well as kindness. Physically, this stone is used in crystal healing for kidneys, pancreas, and liver, lymph nodes, spleen, and leukemia issues. Along with optimism and generosity, it is used to balance self-esteem.  When held close to the body, it amplifies and radiates the energy of vibration as these vibrations are subtle, but they can be applied to assist you manage life’s daily problems.

Shiva Eye or Third Eye Agate stimulates psychic powers and assist in developing an awareness of the Divine without losing the connection to the earth. This unique crystal has a structure that allows vibrations to add together, it calms an overactive mind and energizes the imagination by bringing in new ideas. It helps get rid of the emotional drain of daily procedure and being taken down by obligation, it awakens a sense of adventure and change as it is considered a tremendous tool for giving back joy and spontaneity back to one's spirit. It is an uplifting crystal, helping to banish fears and insecurities while enhancing faith and reliance in oneself and faith in the world. It encourages reflection and introspection, bringing the clarity of rational thought and intuitive wisdom to help drive out an illusion, find out the root cause of an issue, and get one to repose. Third Eye Agates serve best when worn or carried in a sacred space.

Shiva Eye enhances the psychic abilities, intuition, extrasensory perception, mental imagery, and concentration. This Eye is used to understand dreams but is besides a powerful ward against bad dreams and nightmares. Put it beside your bed or the bed of a child having bad dreams.

Eye of Shiva also called the Brow Chakra is a stone for the Third Eye. We examine ourselves and the outside world, interpret what we discover and are aware of ourselves and the universe through the brow Chakra. The brow Chakra interprets the world - our inner world (self), and the world (mass) that comes into the body. It controls the energy flow within the torso and is said to be a code breaker. It is the pattern maker and shows the path of understanding. It balances the imperative and the inconsequential impressions of the life. This stone is also used for general protection and deflect the evil eye; it repels negativity and prevents the psychic attack.

Shiva's eye is known to protect wearers from all forms of negativity help to concentrate the mind, and aid in decision-making. The stone is believed to increase stamina and self-confidence and have a cooling effect on the body. Shiva's eye affects the point where Shiva and Shakti become one.

As and when individual tune this stone into the field of energy that encompasses the Divine Mind, he make contact with the sacredness. This gemstone resonate the sacred energy, via the universal mind for all who use it. Its resonance within the third eye chakra or brow chakra is about individuals’ visionary abilities which enhance a direct connection to the higher self.

This stone helps you to recognize that you can use the aspects of the pineal gland and help to see the uniqueness of the self. Spiritually, tells one that he is a separate individual within the whole.

This stone will boost your Pranic energy and point of verve as you get in touch with the Divine.

Shiva's eyes are famous and popular to manufacture amazing jewelry. The white shiva eyes come as silver fashion jewelry. Though, the story and lineage of the shiva eye are rather amorphous. Along one side of the Shiva's eye, a shell is a beautiful spiral. Along the polar side of the coil is a mesh of colors that resembles an eye.

The Eye of Shiva has solid representation in Hinduism. It is the third eye in the brow of the Hindu God Shiva. Representing wisdom, it is conceived to possess the power to see beyond the obvious. It represents the flow of life the constant variety of cosmos, spiritual knowledge, and ingenious artistic visualization. Form of Reiki the swirl of this stone symbolizes an energy force and strength. Eye of Shiva Shell is a wonderful gift because of its natural beauty blended with its spiritual meanings.

Shiva Shell at a Glance

These natural shiva eye agates from India are brown and black banded characteristically, they just alluded to multi-colored convex surface and elevations are green, orange, creamy and white with color patterns similar. The chiefly white planar side has a thin brown spiral with its source near the middle. 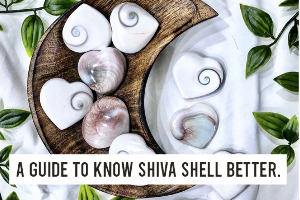 With brown and black band carved into the shape of Lord Shiva’s eyes, the Shiva shell is a truly powerful stone. It...


Jovana
Shiva shell is also known as Shiva Eye as i have read above..i was little confused between these two..but your content have made the things clear in my mind..thanks for sharing..
Reply on 9/4/15
Jack
same here Jovana...i was also little bit confused in these two terms...but Jewelexi is the only one which has cleared this confusion...you will be happy to know that Jewelexi has launched two new sections too of Astrology and Jewelry...I just love their jewels...specially the men's items...good work...satisfying the customer requirements...cheers for Jewelexi...thanks...
Reply on 1/5/15

Stacey
Thanks so much for such detailed information about this! I've been absolutely obsessed with finding these recently. I live on Maui and apparently they are very common.

I'm going through some rough times lately, and I really believe I'm looking for these for a reason.

Thanks for reading this article. Such appreciation notes motivate us to post more informative articles on Jewelexi.

You can ask your questions to Miss Mittens, she will help you to find best gemstone for you. You can visit this link, its a free service:

Have asked my questions to Mittens, so cute, apart very intelligent, want to appreciate her knowledge!

Showed me the way towards my future. Want to thank her, bye bye to my rough times and welcome to my successful and joyful life.

Do try this free service. Although one should go for every possible way towards his good days.
Reply on 28/5/15

Emerald stern
Is there a special meaning in finding shiva eyes? On holiday in Spain last wk I found 6 or 7, of various sizes. Never found one before but love beach combing x
Reply on 4/5/16

Hester Moulton
Likewise you are the ONLY one who has clarified the significance of the Shiva shell. I can see there was much research and caring involved. Thank you
Reply on 11/6/16

Marydell
How do I restore the luster to my shells. On my bracelet? Thank you
Reply on 26/7/16

Cassie
I have a blog about shells. It's at wordpress.onceuponashell.com in case any of you are interested
Reply on 23/11/17

Ralph Smith
I collect these on the Costa Dorada in Spain,was told it was the only area where they could be found in Spain,and locally were known as the ear and eye of the ocean.
Reply on 6/4/19

daisy jones
The Facts about Shiva Shell is so much interesting, thanks for letting me know about these facts & figures.
Reply on 21/5/19

shirley
Very trendy and classy gemstone..thank you gemexi !
Reply on 26/6/19

Arledge
A guide to know shiva shell better is really nice. I enjoy reading about this stone.
Reply on 29/9/19

Amelia
I love your amazing jewelry sets, I purchased shiva shell jewelry from you and i received them yesterday, it looks amazing and the quality of your product is great. My friends saw my jewelry and get really impressed by it, i refer you guys to them so that they can also get the lovely collection. Thanks a lot for this beautiful product. I am really happy.
Reply on 5/12/19