Lulo Mine produced the largest diamond; Lucapa recovers it

https://www.gemexi.com/jewelry-news/diamond/lulo-mine-produced-the-largest-diamond-lucapa-recovers-it
Gemexi Team
The largest diamond is recovered by Lucapa from the Lulo Mine situated in Angola. Diamond Company, Lucapa has recovered the largest diamond of 133.4-carat from its Lulo Diamond Project in Angola. It is the heaviest so far from the mine as it hides a previous record from the view of 131.4 carats set in 2012. 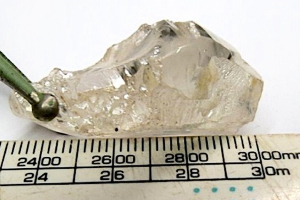 Diamond Company, Lucapa has obtained a diamond of 133.4-carat, which was considered largest diamond ever recovered from the Lulo Mine. Lulo Diamond Project of Lucapa Diamond Company is immediately recognized for the birthing of the heaviest and largest diamond so far from the Angola’s mine. Further, this diamond is claimed to break the previous record of 131.4 carats set in the year 2012. In the statement stated on January 22, 2016 the miner proclaims that the tone of this unearthed diamond is not up to the grade. The breakthrough comes after heavy rains confined access to the Lucapa’s planned mining areas during the fourth quarter. The company has assigned the earth-moving to higher-lying regions of interest in order to try out the new mining blocks, such as mining block 6. Lucapa in the beginning has obtained the diamonds that weights 133.4, 29.2, 12.37 and 11.1 carats respectively. Both the diamonds that are of 29.2 and 11.1 carat respectively, are D-color and of the gem-quality, as per the Yehuda Diamond colorimeter. From the nearby lower-lying BLK_6 and BLK_19 alluvial exploration the miner had already recovered six ‘specials’ diamonds that weights 95.5, 53.2, 32.2, 24.5, 13.7 as well as 10.9 carats as bulk samples. The company too states that Mining Block 6’s is a substantial source, as it holds a potential to produce large alluvial diamonds.

AnaKatarina’s ‘Venus in Furs ‘ in her latest jewelry collection

JA‘s role in the 2016 CASE Awards for Design

Skills Show 2015 in Birmingham gets winners of Fine Jewelry making.

Michael Hill’s 9% growth in sales, listed shares on the ASX