Exposed as a symbol of male strength, Shark Tooth displays the proud masculinity and potency. They are often supposed to brighten the fate when carried and as a sign of the strength it is predominantly worn by the warriors. The clear sign of shark’s energy is the primed for focus in their tooth too. Their tooth is the totem symbol which confirms self-confidence, self-trust and momentum in life.

First came to prominence with the surfing culture of the 1960s, his magnificent fossil was really exploded in the 1970’s. As a talisman to bring affluence and good fortune to the wearer's life, it is believed to protect the individual from evil spirits, shark attacks and water accidents. Representing the buttressing from the evil of the seas, it showscase the power of shark present in it.

According to the Hawaiian culture, it is believed that sharks are the embodiment of god and their tooth as a protective amulet. Apart from rendering protection it also seems as honouring sea creatures, family deities, and ancestors. Considered to be a symbol of friendship becomes a fashion choice today. The natural charm of the “man of the wild” it is known to lure women and create irresistible attraction for women near and far.

Style and type of the tooth shows a discrepancy depending on what shark eats along with the feeding habits. In some environmental and geological patterns, shark’s teeth are the most common fossil. These fossils are used to examine the information on shark progression and natural science as teeth’s are frequently thought to be a piece of the fossil. For fossil records, shark teeth are used to conduct research on its structure, migration patterns of the shark for food and also to identify shark species.

During the late Ordovician period, say about 450 million years ago, the most ancient fossilized shark teeth’s are found, but generally available fossil teeth’s are from Cenozoic era date back to 66 million years ago. Sharks teeth silver jewelry are made up of calcium phosphate minerals, so traditionally believed to treat the calcium deficiency from the body of the wearer. With the easy availability all over the world, their presence can easily be seen in Mesozoic and Cenozoic rocks. Popularly known as tongue stone it is an energetic symbol for the holder and help to convey sleek authority messages.

Where is Shark Teeth found?

People wearing the shark tooth are often believed to adept in extreme social situations and masters at survival in their own life. Wearer inherits the quality of confidence trick and then can easily manipulate things and issues in their favor. People with the totem (shark tooth) can easily navigate through life and become an incredible gut reader.

Sharks teeth are made up of calcium phosphate minerals, so traditionally believed to treat the calcium deficiency from the body of the wearer.  It is reliable and logged to protect the sacred. Sharks are symbolic of acting in life, so it is said to give the strength to the body. Physical vigour I the most vital gift of the shark teeth to his wearing individual.

Believed  to build up the immune system, it promotes the restoration of cells, detoxify the blood and improves the illness. It is supposed to alleviate the severe pains and solve the problem of chronic alcoholism.

To protect the sacred, this fossil is both oracle and embodiment of fundamental life. It enhances the primal instinct and help to stay calm in the relationships especially with the issue of trust and closeness. It is believed to assist  one to transform negative thinking to positive also shift beliefs and actions so the wearer can experience the safety he deserves. It begins its working at the unconscious and energetic level and help people to feel supported. It's a visceral, hard-wired knowing gives success in emotional human mind and release anxiety, frustration. Shark teeth’s are believed to control the triggered emotional reactions, thoughts and judgments which are he source of the emotional pain. It guides the wearer to the path not taken and feel the zeal residing within. It allows to dwell on the future and liberates the happiness.

By uncovering the false perceptions that cause the wearer to cling to pain, it is said to open a deep experience of peace. By clearing off the expectations through which the mind filters all perceptions, it spontaneously lets go of pain from the heart. It is believed to set he wearer free from depression and anger.

With the profound wisdom, it is a symbol of deep intuitions and their hidden meanings. It cognates the mind body spirit and help to communicate with the self. Though it attunes the wearer, it with its spiritual energy help to get benefits.

The spiritual healing of this fossil will help people in different ways and allow the wearer to feel great. It helps in deep, profound meditation and also assists the wearer to accept the alterations of life. It is also a gemstone that supports karmic healing. By developing spirituality, it generates and focuses energy on personal and environmental healing. It is too believed to reflect the knowledge that spiritual light is the healer of darkness

It nourishes self-esteem and unity and empowers one to live and express that truth out into the universe. It encourages sincerity and high calibre, and also tend to carry the energies of spiritual commitment, enlightened action and karmic understanding.

It relays root chakra energy because of its superior instinct. Remarkable drive for survival, its prime root concept is ancient instinct.  From tail to the cranium, sharks convey perpetual fluidity and momentum so as the teeth do. This makes the wearing individual extremely good businessmen, leaders and visionaries. By activating the root chakra, it controls the energy for kinesthetic feeling and movement. It is the basis of physical and spiritual energy for the human body. By balancing this base Chakra, it regains the strength and staying power of the physical structure. The  spiritual energy is rekindled in the form of security and a sense of one's own supremacy. It with time and again contributes to independence and spontaneous leadership. It is also used in awakening the Kundalini energy and facilitates to stabilize the energy grounds.

Some facts about Shark Teeth

Sharks are the embodiment of primal knowing they are authorities on life. They help the wearer to actively move forward in the life and ensure the existence all across. Shark totem carries symbolism for awareness and assists to live the life full on, by preferring to move deftly through the waves of experience - encountering adventure with undeniable exuberance. It is too believed to symbolize the lessons of the death and will only allow the wearer to see renewal - only transition.

Examples of progress in its most assertive stages, it aids the wearing individual not to be consumed by the emotions. It guides the wearer to swim the path of least resistance in life and be efficient, direct in the navigations of the life path. Enveloped in the robes of distance and mystery, shark tooth allows no fluff to enter wearer’s own consciousness.

Shark Teeth at a Glance

Depending on the mineral presence teeth, can be ground in the broad assortment of different colors, ranging from blue/grey to black to orange/red to white to green. 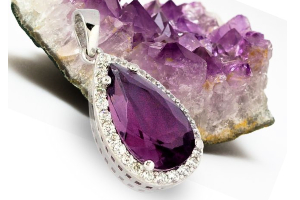 In many civilizations, precious stones, also called gemstones, are believed to hold wonderful yet strange cosmological...


Jimmy
this is my birthstone.. above you have mentioned various shades of this gemstone...which one should i try? help me out please..
Reply on 4/4/15
Ady
hey Jimmy, you may try any one the shades of Shark Teeth gemstone...but before that you should notice its compatibility with you, either by your Zodiac sign, birthstone or any other way. This will be easier for you to overcome your confusion about the hues.
Reply on 28/5/15

Donna Petrie
December is my birth month, and I have always been so confused by what people say is the birthstone for December. Most say it is turquoise, or blue zircon. I have heard recently that my birthstone is blue topaz. I am confused at all the confusion. I don't know another month with these issues. I love Jewelexi's jewelry, and have even purchased a piece or two. I also have great respect for the knowledge of their products, their features, and any lore or truth that goes with them. However, I will say that in more than 50 years of living on this planet, I have never ever heard that though every other month has a beautiful jewel of some kind for it's birthstone, my birthstone is a dull, jagged, ugly shark tooth. Yuck! :(
Reply on 10/7/15
Jewelexi
Amethyst and Violet are the two colors that represent winter solstice that ranges from 21 Nov-20 Dec to 21 Dec-19 Jan.

Your birthday is in the month of December, so people would recommend you to wear the gemstones of these two colors. Color energies work for people as well as in some or the other way connected to our Mother Nature. As season changes, a color too changes. Colors lay in the crust of the Mother Nature and clutches the grounding vitality of the earth. The vitality of each color crystal affects myriad parts of the human body.

So the gemstones of these colors show their effect in a positive way, and we people relate them to our birth month, as a birthstone.

December is cold and a last month of a year, furthermore the season cycle will change again by the end of this month. Jupiter governs the people born in December and numerology says the number for this month is 3. Thus, people born under this month holds the charismatics of both Jupiter as well as number 3 and have the tendency to be a master of all trades.

Miss. Mittens recommend December born people to wear shark teeth, as it helps to enhance the masculinity and potency of a person.

Further, she adds if December born people wear the shark teeth, they face no problem to adapt themselves in extreme social situations as well as masters of survival in their life.
Wearer inherits the quality of confidence trick and then can easily manipulate things and issues in their favor. People with the totem (shark tooth) can easily navigate through life and become an incredible achiever of things. It helps to gain the riches of life too.

Please read the article to know about the healing properties and effects.
Reply on 10/7/15

casey
HollA!..i'm living a very stressful life right now.. imy routine makes me so tired that i don't be able to take a single glass of water by myself..i live very sad and unhappy thses days..One of my friend has suggested Shark Teeth Stone for me ..it helps in generating positive energy in inner self..would anybody pls suggest that should i buy this stone?
Reply on 29/9/15

Rubal
You work is so appreciable as you always provide us the meaningful stuff regarding the stones!!
Reply on 3/9/19

christna
I never heard this type of gemstone and surely I love to buy this...https://www.gemexi.com/gemstones/shark-teeth
Reply on 22/10/19

laira
What a unique shark teeth gemstone Its design is very interesting and unique I love to buy it.
Reply on 9/12/19