We all love to collect sea-shells from the shoreline and get them home to add a beauty to our collections. Beautiful though sea-shells are, but there is so much more to them.

The shells in the form of ammonites change their shape at different echelon, in line with the changing of World Ages according to the fossil records.

Fossilised nautilus shells enhance the lustre you with universal energies. Nautilus sea shells deflect superfluous energies from your aura and prevent any positive energy to move out from the body. Nautilus Seashells rationale to purify the surrounding space. This shell incorporates water feature and develops the living qualities of water in a wearer. Shells act as a symbol of the particular universal form along with natural cosmos and triggers wearer memory to innate health and happiness.

The shell nautilus is an emblem of beauty and proportional perfection. It is a nature’s treasure one just needs to discover its secret ratio.

Nautilus shells are a symbol of the triple goddess which signifies the three stages in woman’s life: first as a beautiful young unmarried woman (independent, self-absorbed, seeking as birth), second as birth giving the Mother (unified, consistent, compassionate fostering, creating), and third as death and renewal the Crone (holistic, remote, and unknowable). According to sacred Hindu rites, shells are used to purge the earth of negative energy.

Where is Sea Shell found?

The emblem of peace and good faith shell objects are omnipresent in the world in ancient China, the Mississippi River Valley, Sumeria or Europe. Pre-dynastic Egypt, antiquated England and excavations of grave sites in Saxon Germany have also revealed the presence of shells. Shell entities are also discovered in tombs in China's Yunnan region. They are found in the Pacific, Atlantic and the Gulf of Mexico (Aztec Ruins National Monument in New Me) and North America too.

A fossilised nautilus shell invokes calmness, it is considered to be soothing, clear and cool. Shells hold the energetic intent for the meditation. According to the history recorded shell, was exceedingly cherished and treasured across continents and cultures. Shells serve three purposes predominantly as a medium of currency or trade, as personal embellishment, and as an imperative part in ceremonial matter possessing spiritual or talismanic characteristics.

Its healing properties are reflected in the human energy field and are the symbol of the masculinity and the femininity; it gives the wearer the strength, balance and renews the physical energy. Shells hold the curative values for diseases, like speech and communication, nervous system by delivering the cationic charge to the neural network and degenerative diseases.

There is wisdom in the nautilus shell it is also known for the path of growth and health-full body. The nautilus helps you to remain aware of the connection between past and present.

The nautilus shells allow the wearer to realize that discovery and growth engross continual crisis with instants of comfort speckled in-between. In pushing past which give the impressions to be the outer limit the curves of life shells open new doors and unfolds the most beautiful future.

Shells reduce stress and allow a greater sense of awareness. Shells can accelerate the healing process too mentally, physically and emotionally. Shell symbolise water and moon which allow an individual to become more expressive, calm and soft hearted. Shells depict unity too and imply to express the relationship, strength, balance and energy. The magnetic energy of shells balances the larger magnetic field that surrounds the human body.

Shell as an analogy of a spiritual evolution offers us an effective possibility and opportunity for healing, growth, and balance.

Sea shells regenerate and heal the power of Nature from vibrations so called ‘sung into being’ or resonance. Evidence proved that nautilus shell creates a sound aura and is used for sound healing practises in meditation and is coincided with the greatest concentration of artworks.

Nautilus sea shells strengthen the energies of Nature and the universe and help to attune one the regenerative winding. Sound healing geometry of Nautilus sea shells ‘sound of the song’ heals Kruin Chakra of the human body. Shells said to be associated with throat chakra which enhances communication and clarity.

Fossilised nautilus shells ultimately tune the wearer with Nature and universal energies and grounds the spiritual body into the physical, it stimulates institution too. Shells work to calm an overactive brain, however stimulating new ideas it also energises the imagination. Nautilus shells are known as a stone of transformation and are useful for support while going through a period of change.

Shells incorporate a water feature which in turn cradles the soul cleanses and purifies. Shells are chosen as a memory activator of our instinctive health and well being, and for being part of a larger natural outer space. Shells reflect the spectrum of healing light in which each person and the organising principles help the wearer to stay in a natural law. Nautilus fossils, shells are said to instil one’s quality in order to heighten business accomplishments.

Some facts about Sea Shell:

Shell is exceptional in assisting in memory & dream evoked. It will help one memorize things as well as help to interpret any applicable symbolism. It enlightens wearer painful parts of the self that are hiding in the subconscious mind or realm. Shells have the ability to tap the universal love source and help to feel it which connects all beings. Like a protective mother, sea shell proves to be a protective stone which will safeguard the wearer from negative energies.  It either disperses or absorbs all the negative energies from the aura.

Sea Shell at a Glance

Seashell is basically found in off-white and pale pinkish tones followed by other colors like orange, brown, white and black. 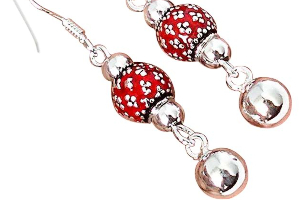 The energies of the silver too evoke an altruistic feeling as well as help to find the inner meaning of the things.


Ady Smith
as per my knowledge..sea shell comes in one shade only which were found along the shore...but here there are more than that.. nice!! thanks for sharing such an unknown fact about it..
Reply on 10/4/15

Ady
Oh Wow..!!! I like these Sea Shell jewelry pieces. can you please tell me how can I shop these. the gaudy hues of these are attracting me. I want these...reply soon..!!
Reply on 27/5/15

Erick
I have a house and it burnt down but I heard really pretty singing and other things and idk why but I truly feel in my soul that I am getting vibes and things coming from the shells under my house it is so weird.
Reply on 5/4/17

daina thomsan
it looks so beautiful after wearing this I loved it so much.
Reply on 21/5/19

lthan
Thank you for sharing this informative article with us.
Reply on 13/8/19

Harper
I am a crazy person about sea shell gemstone especially the necklaces, I love them a lot and I saw that you have a superb collection of it. I get really impressed!
Reply on 5/12/19