Not exactly an agate because of the properties and appearance, Moss agate is a semi-precious stone having multi-shades of green, which somewhat resemble those of leaves and mosses from the distance.

Moss agates, in previous times, were considered as the stone of warriors. All the way in the course of history and all cultures, Moss Agate has been recognized as the gemstone of the agricultures and gardeners. It was considered a phenomenal healing stone for the priests of the tribal areas, giving them power to interrelate with the human organic system.

Moss agate or the mocha stone is a semi-precious stone produced from silicon dioxide. It is a type of chalcedony which consists of mineral deposits of green colour rooted in the stone, creating strands or other wonderful patterns indicative of moss.

Moss agate sometimes also resemble blue cheese. Moss agate gets it colours through the trace amounts of metal present in them as an impurity, such as iron or chrome. The valence of the metals plays a vital role in colours of these stones.

Despite its name, Moss agate does not include any kind of organic material; rather it is formed out of the weathered volcanic rocks.

Where is Moss Agate found?

This astounding green stone is present at a number of locations around the world. However, there are certain locations in the world, which are more well-known for the deposits of Moss agate such as, Russia, Australia, India and the USA. Montana Moss agate is a popular variety of moss agate, which comes from the Yellowstone River.

The benefits of Moss agate includes:

Moss Agate Silver Jewelry encourages the wearer in all aspects to inculcate in him the feeling of spirituality right from releasing all the negative energies out to connect him with the karmic attachment from past lives. It augments awareness and knowledge in the wearer about the power that is responsible for the survival of all the living beings and the earth.

It is believed that Moss agate opens the lines of communication between the holy spirits and the natural spirits.

Moss Agate is a “growth crystal”, and it embraces the energy of green colour. It is a potent gateway of the life forces on the including the birth, development, death, and renewal of the living organism. Being green in colour, Moss agate is a nurturing stone. It nurtures and upholds the new business and the relationship of the wearer with his loved ones.

The lighter shades promote spirituality, and the darker shades instil strength and growth.

Moss Agate boosts the perception of the senses and neuronal activities.  It eradicates depression and stress caused by the imbalance of the left-right brain. Moss agate improves analytical abilities, concentration, and perception.

Being anti-inflammatory in nature, Moss agate cures cold, infection and swelling, fever and influenza. It gives positive results in treating long-term illness and recovers the immunity of the wearer. It is also thought to prevent dehydration and hypoglycaemia. If applied as an elixir, Moss agate treats skin irritations and fungal infections.

Moss Agate is cooperative in regulating the pulse, heartbeats irregularities, and the circulatory system. It is also advised to those who suffering constant buzzing in their ears. It also treats emotional disharmony and strengthens the chest.

Moss Agate is also beneficial in stimulating the digestive system, relieving gastritis, and eliminating the contaminants from the body. Agate may also trim down the indicators of epilepsy, and for some people it has also been proved as a protector against sleepwalking.

Moss Agate is regarded as the envoy of peace and emotions in the mind and body of the person. It is helpful especially for those who undergo extreme mood swings and emotional drama in their life. It soothes short temper, impatience, anguish, and other such negative feelings. For the wearer, it is also beneficial in strengthening his image and instilling good personality attributes.

Being a hopeful stone, Moss Agate is considerate for those people who are suffering from complicated life circumstances, despair or mental imbalance and are in quest of finding hope and trust.

Some facts about Moss Agate

Moss agate is believed to help in finding the hidden treasure and is also referred to as a Stone of Prosperity. This charm possesses distinctive powers that depend on different shades in which it appears.

Moss Agate at a Glance

Moss agate is a semi-precious stone that well equipped with some minerals of green tincture and is a form of chalcedony.

With its red spikes and black dots pattern, the Montana Agate captivates the immediate attention of any viewer. The jewelry...

Inspire the Waggish and Artistic Flair with the... 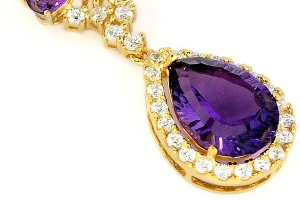 The healing potential of gemstones, especially Amethyst hues of the stones infuse an inspiration to create something...


Jill
I have also heard about Moss Agate that when we use it as a Feng Shui element then it attracts prosperity and health towards the wearer. I will try it for this. Thanks for sharing.
Reply on 7/11/14

Hart
My father is having insomnia problem. He can’t take sound sleep. He gets disturbed by the unpleasant dreams. Should I get this talisman for him? I have read that Moss Agate is beneficial in this case. Please suggest.
Reply on 1/12/14

Angelo Hall
moss agate is actually a green hued gemstone...as i have seen..but here i am surprised that there are many others..of which i was not aware..thanks for sharing helpful information...there are many aspects on this page that are new to me..thanks once again..
Reply on 10/4/15
Cloe
yeah Angelo, i was also surprised to know this. I have tried the yellow piece. You may also go for it if you find yourself interested in it. To confirm your suitability with Moss Agate you may ask Jewelexi at their Ask Mittens Page. Here the free questions are posted and the exerts of Jewelexi bestow their replies accordingly.
Reply on 25/5/15
Angelo
Thanks Cloe, I will ask Jewelexi whether Moss Agate is compatible for mr or not. Its properties are as per my requirements but still I want to be sure.
Reply on 16/6/15

Wyatt
I am running a small scale business and heard alot about Moss agate stone that it helps in business and the gradual expansion. Please suggest ..
Reply on 30/6/15

Poppy
Moss Agate is my 2nd favorite gemstone which I love to wear after emerald. And I analyze that you have a nice stock of it.
Reply on 28/6/19

jollie
The green color of this stone is very eye-catching and pretty.
Reply on 10/10/19

jessica
Hi... I saw your site and I like your collection. You have so many varieties of stones which I never find anywhere. It's impressive.
Reply on 2/12/19